And the NYC Trip Sweepstakes Winners are… 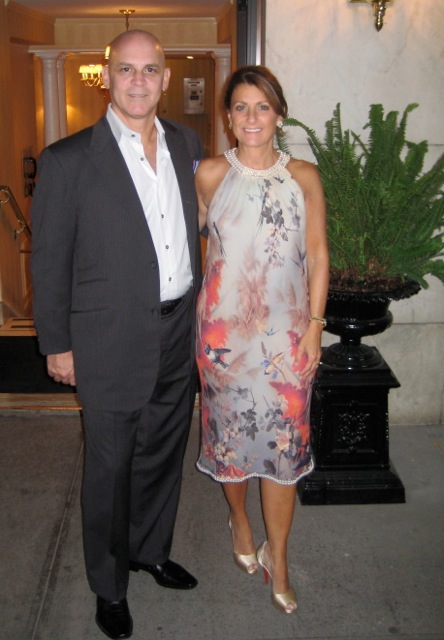 Rick Crescenzo, was having a stressful day at work when he picked up the phone to find out he’d won our New York Weekend Sweepstakes. “It took a few seconds to sink in,” he says, “but then I just felt so much better about my day.” He continues, “I’m not a big contest-entering person, but I have to admit it was thrilling to win and I just might enter a few more in the future!” His wife, Cynthia says, “I have literally never won anything, except a pink stuffed dog when I was 6 years old. I’m not kidding. So it was a complete shock.”  Good answers guys — that’s what we were going for! We were also hoping the winners would appreciate the “design” elements of the weekend, and these two clearly will.

Cynthia, a knitwear designer with a fabulous online knitting store and blog, (Check her out atwww.knittingcentral.com) thinks the whole weekend is “an incredibly special treat.” She loves The Gramercy and The Modern, and like Rick, who is a bond salesman on a trading floor, (“Yes, I am one of those Wall Street Guys,” says Rick. “That said I have been in the business for over 30 yrs which says a lot about the way I treat my clients.”) is particularly excited to attend the Architectural Digest Show. The couple loves the magazine and have found a lot of inspiration from it throughout the years. They both agree that the photography is exceptional. Something Cynthia particularly values, since she spends a lot of time with her camera, taking photographs to inspire her knitwear designs.

And speaking of inspiration, the weekend itinerary includes, a two night stay at The Gramercy, brunch atMaialino, the winner of the 2011 Zagat Survey’s Best New Restaurant in New York, tickets to the Museum of Modern Art, dinner at The Modern, the winner of The 2011 Outstanding Wine Service from the James Beard Foundation, as well two tickets to The Architectural Digest Show.

While Cynthia is the professional when it comes to knitting, we were surprised and impressed to find that Rick also knits! “It’s a stressful atmosphere,” says Rick of his bond salesman. “I knit, but more for the therapeutic results after a long week on the floor.  I am proficient enough to have done design work on original patterns which become heirloom gifts for friends, family, and clients.”  OK, Rick, next time we have a big project, we’re going to get some yarn and give it a shot.

Aside from being a bond salesman and knitter, Rick, also really enjoys landscaping and carpentry. He says “Cynthia and I both have an eye for color, fabrics and the coordination of these things within the entire design process, right through to the finishing phases, including window treatments.  Back Bay will be in our thoughts when our next project comes up!”

Congratulations to Rick & Cynthia! We hope it’s a great weekend in the Big Apple. Send us a postcard!

Open
A Designers Best Friend! Furniture for your windo

Furniture for your windows.

Projects primed and ready for first coat in our finishing shop. Any color any brand.