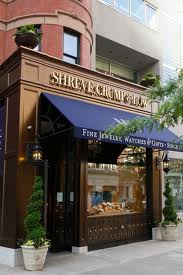 Shreve Crump & Low, a Boston institution, is one of the oldest jewelry stores in North America.  It dates date back to 1796. And while Back Bay Shutter Company, Inc. is a bit younger, we have a lot in common, since we both stand for the finest craftsmanship and have the utmost integrity in our products. Yes, Shreves is known for its jewelry and wedding gifts, and we are known for our interior wood shutters, and manual and motorized shades, but we’re both known for our exemplary customer service. So, it’s a perfect match, that Shreve’s chose us to help them with window treatments at their prestigious Newbury Street location.

But a little bit more about Shreve’s history before we get into our project with them.

John McFarlane, a watchmaker and well known silversmith back in 1796 was the man behind the beginnings of what is now known as Shreves. The workshop he opened across from Paul Revere at Downtown Crossing, grew through the 1800’s, and through many incarnations, until it came to be known, in 1869,  as Shreve, Crump & Low. The Great Boston Fire of 1872 destroyed their entire store, but Shreve’s rebuilt and became THE jeweler of Boston’s high society. This was where the Cabots and the Kennedys shopped.

Besides jewelry, in 1899, Shreves was asked by a Harvard University tennis player named Dwight F. Davis to create a trophy to be awarded to the winner of the tournament, which is now known as the Davis Cup. Pretty impressive stuff, right?

We’ll be installing clutch roller shades for Shreves. Of course, they’re not just any shades, they’ll feature the Shreve, Crump and Low crest. We can’t wait to see the results. It’s a great honor to work with one of Boston’s most iconic companies.

One of Our Best Friends in the Biz: Raybern Hardware
And it’s Another Edition of 5 Under 40!

Open
A Designers Best Friend! Never out of style. Trad

Never out of style. Trade preferred for over 31 years.

Open
A Designers Best Friend! Never out of style. Trad

Never out of style. Trade preferred for over 31 years.